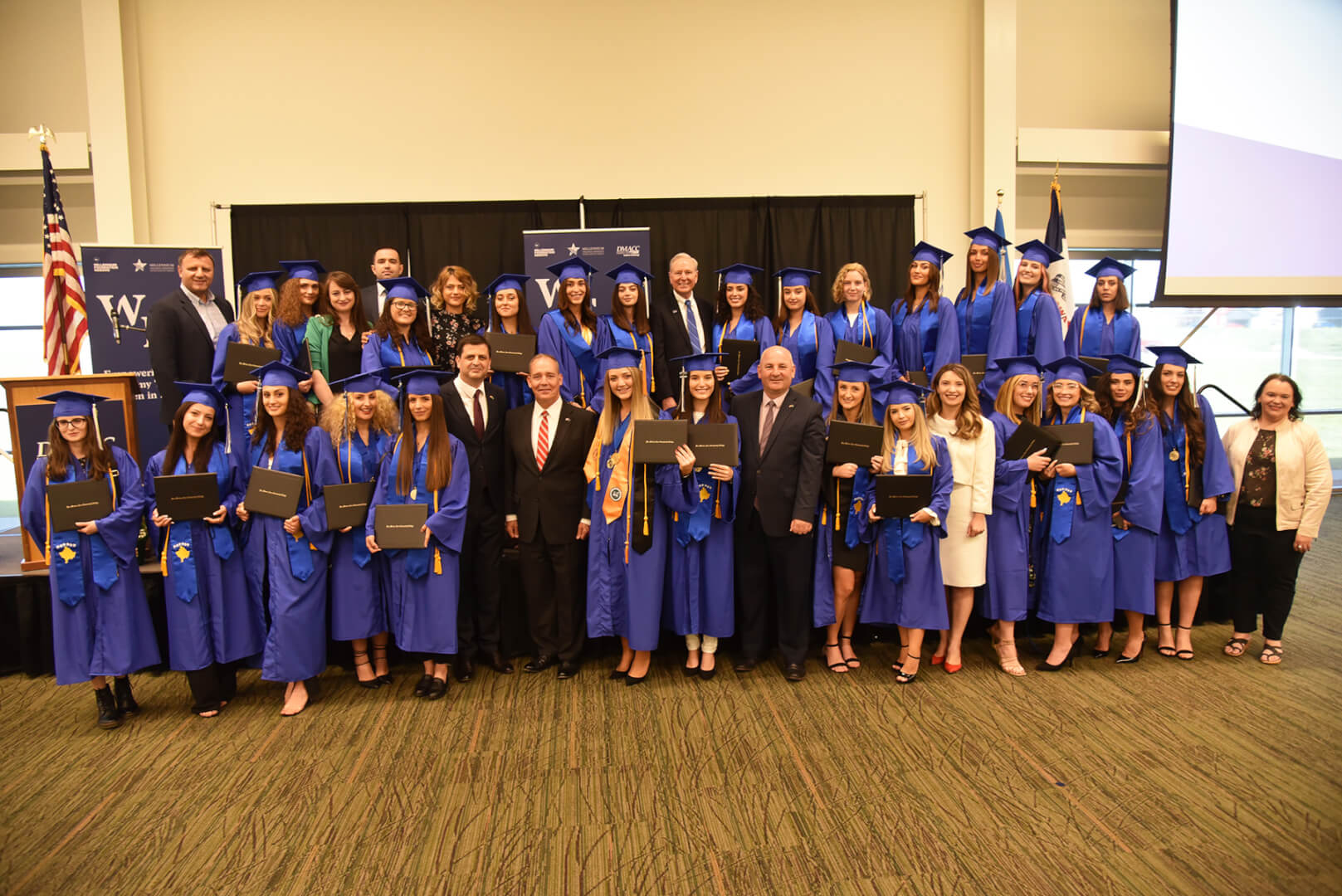 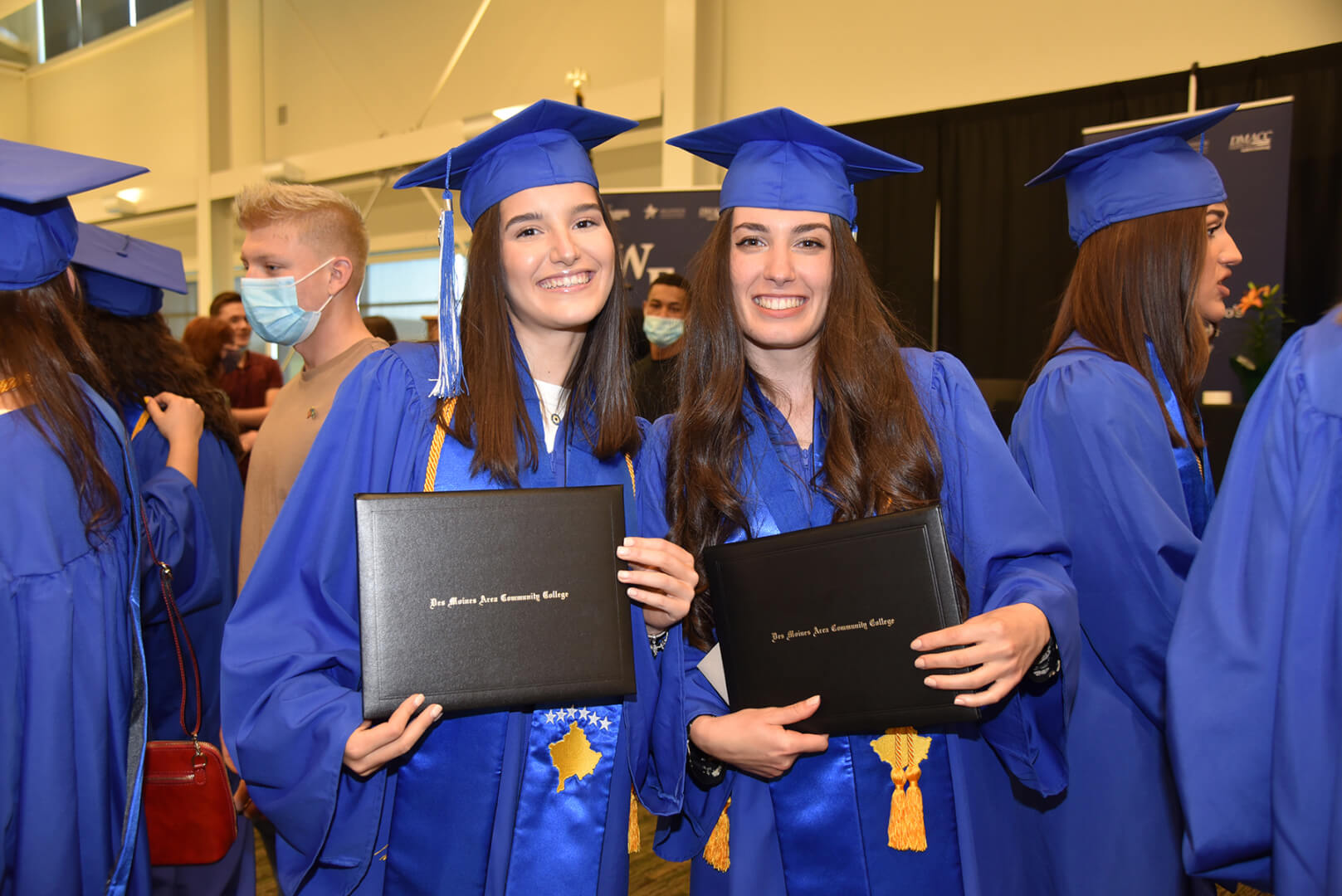 In a video message, MCC Country Director Sarah Olmstead tells graduates: “You are now poised to be leaders in that transition here in Kosovo. As you come back to home and start to take jobs or think about starting something new, keep in mind that not only will we all be watching and rooting for you as you make your way, but the youth of Kosovo will also be watching and learning from your experiences.”

During this ceremony, MFK CEO Petrit Selimi congratulated the girls and thanked DMACC for its close collaboration and warm welcome to the scholarship recipients. “WE Program which was supported by friends from Washington DC to DMACC and across Kosovo really brought together hundreds of women who got inspired by the words and deeds of some of the women pioneers in the energy sector and now they’ve become the new generation of women leaders who finished this stage in their life and are about to commence a new path with new knowledge hopefully with new drive and new enthusiasm to help Kosovo meet its fundamental constraints in energy”, Mr Selimi added.

This ceremony was joined by the President of the Republic of Kosovo Vjosa Osmani, who via a video message sent warm greetings to the 27 women who are expected to be back in Prishtina and contribute to the energy sector of the country. President Osmani told the graduates how proud she is about their achievements and their courage to pursue a career in STEM, while encouraging more girls to do the same: “Having more women in STEM is not only the right thing to do, it is certainly the smartest thing to do, it is exactly what we need to do right now”, President Osmani added. Madam President went on on highlighting the role of MFK’s Program  for the country’s growth by stating: “Women in Energy is a program that has not only changed your lives forever, it is it a program we are all thankful for and highly appreciate, as it is the program that also contributes actively now towards changing the course of history for women in energy in the Republic of Kosovo.”

MCC Acting CEO Mahmoud Bah congratulated the graduates, pointing out the crucial importance of women’s inclusion for Kosovo’s growth by stating: “Countries cannot succeed unless women succeed, and investments like this scholarship program to support the key role of women in Kosovo’s energy future play an important part in making that happen. Mr. Bah went on to say:  “MCC’s work in critical sectors like energy is part of a holistic approach to build climate resilience, promote climate-smart economic development, and raise people out of poverty through engaging them in the transition beyond fossil fuel-based energy sources. Today’s graduates will continue to be a force for positive change in their communities, drivers of economic growth, and a source of inspiration for women everywhere.”

Throughout this two-year period these women have grown professionally, met new people, and have been exposed to different cultures and ideas. Furthermore, they have developed their practical skills and gained knowledge which has prepared them for success in the Kosovo labor market. Studies in Des Moines Area Community College (DMACC) have  focused on hands-on interactive education and training through advanced technology and laboratory work. Now, these graduates are ready to return to Kosovo and apply their knowledge for the benefit of their home country.

“Attending classes in a different approach, especially with the many lab opportunities has been a tremendous experience and adding this to my previous studies will tremendously fulfill my professional growth. The knowledge we have gained here will be an asset to our careers and the overall energy sector in Kosovo.”, states Alketa Sahiti, who graduated from DMACC with an Associate degree in Power Plant Technology.

As beneficiaries of the Women in Energy Program of the Millennium Foundation Kosovo (MFK), these young women are already potential employees of some of the leading companies in the energy sector in Kosovo. These firms have expressed their willingness to meet these new graduates and have invited them to join the market.